A Future You Wouldn’t Wish On Your Enemy 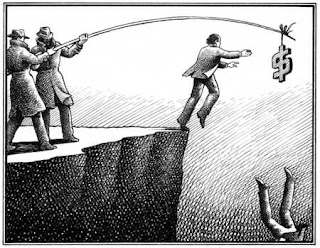 If you told me, 5 years ago, that I would be willingly writing an article about the financial situation here in Greece I would call you a crazy man and I would have walked away.

I am now 30 years of age and most of these years have been pretty good, money wise. The 80's and the decade of the 90's was an era of big spending without limits here in Greece. We did spend more than we earned. Loans were given by the banks for nearly everything. There were loans available for someone to go on vacation or get married. Loans to buy cars and spend it on almost anything. The banks asked for nothing, they did not know if people could repay the debt and they did not check it either. The only thing they cared was to provide the loans. So people became depended on the banks and a false promise was made, of never ending money and a prosperous life.

A life that was peachy up until 2009. Most people did not save money because the banking system assured them with multiple loans nothing could go wrong. Some people even took a second and a third loan to pay for their first and so on.

The 1999 introduction of the euro as a common currency reduced trade costs among the Eurozone countries, increasing overall trade volume. However, labor costs increased more in peripheral countries such as Greece relative to core countries such as Germany, making Greek exports less competitive. As a result, Greece saw its trade deficit rise significantly.

So it was in late 2009 that the Greek Depression started. In late 2009, fears developed about Greece's ability to meet its debt obligations, due to revelations that previous data on government debt levels and deficits had been misreported by the Greek government. This was called Greekonomics. This led to a crisis of confidence, indicated by a widening of bond yield spreads and the cost of risk insurance on credit default swaps compared to the other Eurozone countries. The stock market collapsed along with the housing sector. Land lost almost all of its value, unemployment rose to 30% amongst the general public and people stopped paying their debts to the banks which accumulated a great number of 'red' loans.

Another persistent problem Greece has suffered in recent decades is the government's tax income. Each year it has been below the expected level. In 2010, the estimated tax evasion costs for the Greek government amounted to well over $20 billion.

By the year 2012, Greece's government had the largest sovereign debt default in HISTORY. Greece became the first DEVELOPED country to fail to make an IMF €1.6 billion loan repayment on June 30, 2015. At this point in time, the Greek government has debts of 323 billion €.

In February 2012, it was reported that 20,000 Greeks had been made homeless during the preceding year, and that 20 per cent of shops in the historic city centre of Athens were empty.

Moving forward 2013 will mark the sixth year of my countrys Depression, during which the country has lost more than a quarter of its GDP. Personal income has been in free-fall since 2010, and it’s unlikely that wages will rebound for many years. Seldom has the cost of political incompetence and peoples incompetence to manage finances has been spelt out so vividly.

At the same time as the welfare state is being gutted, the expectations, income, and quality of life for an entire generation and the generations to come are being constantly adjusted downward. The same generations that became accustomed to cheap credit following Greece’s accession to the eurozone in 2002 is now trying to learn to live on far less. Wages in the private sector have declined more than 30 percent since 2010, and minimum monthly wages have fallen 22 percent, and 32 percent for those younger than 25. Meanwhile, lack of competition, oligopolistic behavior, and rising taxes have kept prices elevated. With joblessness on the rise and the middle class squeezed from all directions, the "new poor" of Greece are fast rising. The percentage of Greek households at risk of falling into poverty increased to 21.4 percent in 2011 from 20.1 percent in 2010.

You can point to a lot Greek politicians and we the people have done wrong, such as lying with statistics to get into the euro zone in the first place. Oh, and the widespread tax evasion that seems to have pervaded the country for decades. And the ridiculously cushy public jobs with lavish pensions.
But even with all that, there’s no excuse for deriving any kind of glee from the very real difficulties we Greeks are facing.

The latest report on the return of malaria to Greece shows the shocking decline in recent years.
The Greek depression has already surpassed and outlasted those of Argentina (1998-2002), Indonesia (1997-1998), and even Germany’s pre-WW2 economic crisis (1929-1932) which contributed to the fall of the Weimar Republic.

Only the Great Depression in the U.S. and Russia’s 1989-1998 output collapse saw a steeper and more-protracted loss of national income.

The past ten days we are having a bank holiday. People are being forced to live on a petty amount of euro. Gas stock and Food stock is really running low for everyone. Tourism which is our heavy industry has taken a major blow leaving more and more jobless (I am one of those people working in this sector of the economy). Most people now are unemployed for more than 2 years. I personally had a job that I lost due to this phenomenon. I have been working 1 month now. I had not worked in the past 2 years. Right now I am converting every cryptocurrency I own to fiat (by selling to friends) just to be able to live a normal life. I am a proud Greek though and its not my intention to beg here.
I just keep in mind that the ultimate goal is to have a good health and a decent life. I myself have never received a loan from anyone. But I am here because I need help.

For anyone that does not believe this story I can dox myself via killerjoe@aol.com

If you would like to giveaway other coins please post a comment here or come find me on irc on freenode username killerjoe
Αναρτήθηκε από killerjoe στις 7:35 π.μ.